Back in the days when the now-famous Ship Of Fools website was a print magazine thirty-odd years ago (aagh!), it printed in Issue 3 (June 1979) this cartoon strip. I reproduce it below with permission from the editor, Simon Jenkins, and Ship Of Fools. 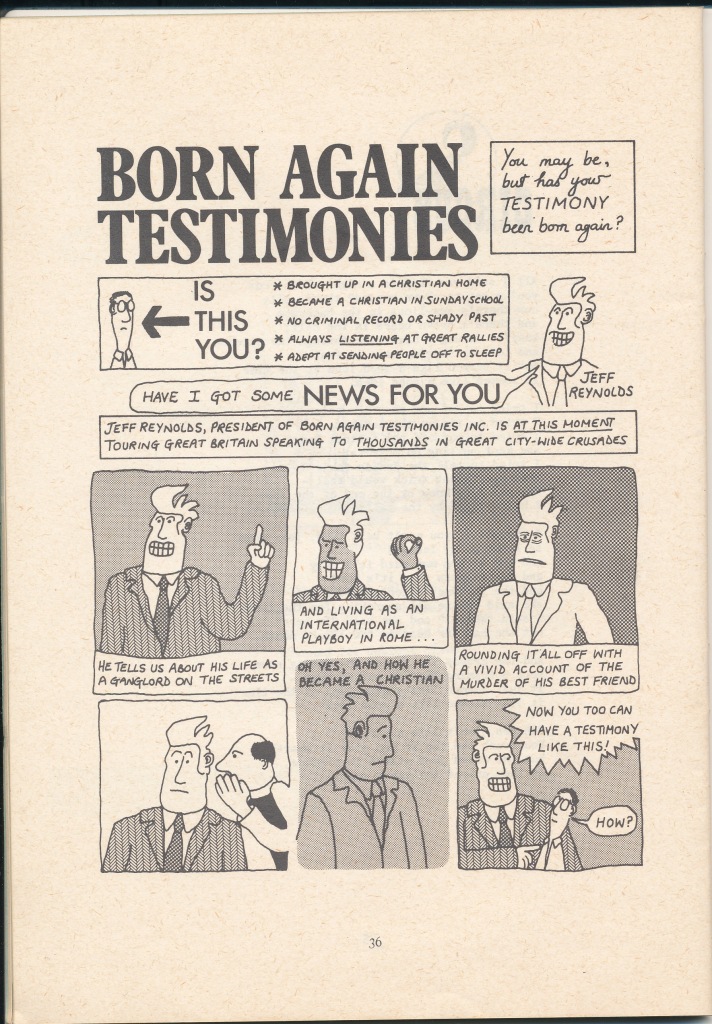 How apposite this seems in the light of the Tony Anthony story. For those who have not heard, Anthony, an evangelist, had a book called ‘Taming the Tiger’ ghost-written by a journalist called Angela Little. Ever since its publication in 2004, some have been sceptical about claims Anthony makes in there about significant details of his life. Now, following the resignation of one of Anthony’s trustees, Mike Hancock, an investigation has indeed shown that large parts of the book are untrue. Journalist Gavin Drake has many of the details. The Evangelical Alliance and Avanti Ministries issued this statement. Ghost writer Angela Little revealed some possibly surprising approaches and attitudes to research and verification in a conversation with someone on a martial arts discussion board. The publisher, Authentic Media, have issued a statement, but it is hard to detect any sense of them taking any responsibility for the debacle in their words.

But my purpose here is not to analyse this specific case. It isn’t hard to find those on the Internet who are doing so. The reason for posting this is to ask what kind of culture promotes the lust for spectacular testimony books, such as Anthony’s.

I suggest there are at least two reasons. The first, briefly, is that evangelical Christianity is too obsessed with celebrity. And if we haven’t got any celebrities, we’ll make some. In this respect, we mindlessly accept the values of the world. I have no wish to decry those who genuinely have become disciples of Jesus Christ through a dramatic route. God bless them. But celebrities are not more valuable than the unknown. Indeed, we believe – surely? – in a Jesus who was and is on the side of the marginalised.

But secondly, we have a huge issue over privileging dramatic conversions, and this troubles me pastorally. So often I hear Christians feeling inferior because they have not had a ‘Damascus Road experience’. It may even make them doubt whether they are Christians at all. I tend to say, “Do you have to remember when you were born to know you are alive? No! You just need to notice the signs of life. And it is the same in spiritual matters.”

In the early 1990s, Churches Together in England commissioned some work on conversion. It was published in 1992 by the British and Foreign Bible Society under the title ‘Finding Faith Today‘, and was authored by John Finney. 54% of the 601 Christians interviewed said they knew of a time when they were not Christians,46% had ‘always been Christians’. Of the former category, 38% spoke of a sudden conversion, and 62% gradual. Of the latter category, 80% had a gradual commitment, 20% sudden. Among evangelicals, it was as I reported: 37% sudden, 63% gradual. Among non-evangelicals, it was 80% gradual, 20% sudden. On average across all Christians, 31% had a datable conversion and 69% did not.

So if datable conversions are a minority experience among Christians, then dramatic datable ones must be an even smaller percentage. And I therefore have to ask how helpful they are, when ordinary Christians feel demeaned by them. I think publishers are partly responsible, and need to rethink their policies. I also think the wider Christian culture is possible, because whatever we say about these contributing to evangelism, in reality they are often treated as Christian entertainment with a spiritual veneer.

As Phil Groom asked on the Association of Christian Writers’ Facebook page today,

Why do we need super conversion stories to proclaim the gospel? Isn’t the gospel dramatic enough??

So – does an addiction to dramatic celebrity testimony indicate that we don’t really believe in the Gospel?