Right now as I’m typing these words I shouldn’t be at home. I should be in a Methodist church building in Clevedon, Avon, for a memorial service. However, icy conditions have prevented me taking the journey. 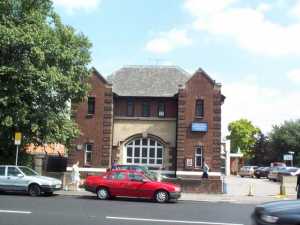 The one being remembered is the Reverend Howard Ashby. Howard was my minister in those formative years of mine between the ages of twelve and nineteen. He and his wife Ida had something special about themselves. They were somehow different from the typical churchgoers who, while nice, seemed to my teenage mind to treat church like a religious club. At an age when rebellion was on my agenda, Howard and Ida had something indefinable that kept me questioning.

It was in his manse study that I found Christ. It was Maundy Thursday, 1976 – 9th April that year. As I’ve said from time to time here, I grew up with the mistaken idea that faith equalled believing in God plus doing good. As he took me and a few other teenagers through the promises and professions of faith in the Methodist confirmation service, I finally discovered that it was about faith in Christ and that the good works stuff only followed as a sign of gratitude.
As a family, we had such fond memories of him. My grandmother lived with us. She had had a stroke, and thanks to a medical error was treated for years afterwards with that evil drug Valium. Under its malign influence. Nanna retreated. She barely went out and she spent most of her time in her room. Whenever Howard visited, he always ended by saying, “God bless you – and he will.” I’ve used those words sometimes with people in my ministry as a result of his example all those years ago.

I’m sorry not to be in that service this afternoon. I would like to mingle with others who have fond memories of him, and reasons for gratitude. I would like to meet again members of his family. Howard’s son Paul was my ‘assisting minister’ at ordination, so the wider family is special to me, too.

But if Howard had that effect upon me, who was it for you? And how?