I am recently on record as having grave reservations about Mark Driscoll‘s teaching and attitudes to those he disagrees with. But as goes the man, so goes the church and group of churches he has founded. Here are some gruesome links. The stories are so consistent.
Matthew Paul Turner tells in two parts the story of a young man who confessed to sexual sin and sought help, but who was then placed under draconian discipline with a ‘contract’ that could be described as voyeuristic. When he deems it unfair, he is removed from Mars Hill’s social network and those in his home group are told not to associate with him and are even given a form of words to say, indicating their assent to Mars Hill’s decision. Frankly, the way they put words into the mouths of people could come from North Korea.

A couple separately tell of the pressures they were put under by church leaders when they decided to leave a Mars Hill church, even though they tried to do so diplomatically. Detailing Scripture just isn’t good enough in a church that likes to talk more about correct doctrine than Jesus.

Earlier, when another member queriedwhy he was being asked to shun a sacked staff member when he doesn’t see evidence of the kind of outright sin that would lead to ostracisation in the New Testament, he is told by an elder, “When dad and mom are having an argument the kids don’t need to know what’s going on.” The church member concludes,

So when dad and mom live off the tithe checks given by the children they don’t have to explain why dad decides to fire mom?

Later, his membership covenant (which has to be renewed every few years – a strange kind of covenant that, he observes) is voided by the elders.

Time and again, if you click on these links, you will see people are using words like ‘control’, ‘spiritual abuse’ and ‘cult’. 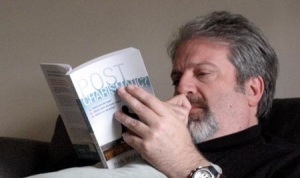 Bill Kinnon understandably asks why that bastion of the neo-Reformed movement, the Gospel Coalition, hasn’t spoken out against Mars Hill. Driscoll is one of their council members, and they have had resignations before on grounds of doctrinal controversy, as Bill points out. But what does Driscoll have to do for that to happen? Let’s suppose that actually it’s being addressed behind closed doors. If so, that would be a good start. But this has gone on for a long time now. The sacking of two key leaders (one of whom was the person to be ostracised in the last story above) happened in 2007. It’s unthinkable to consider that any such measures were still at the first level of New Testament discipline, the private stage.
Why, then, is there a conspicuous silence in the public arena? Could it be that Driscoll is the poster boy of the movement, untouchable due to the numbers he and his churches draw in? Could it be that he is regarded rather like a mercurial and talented footballer who is something of a rebel, when he might be more like a Paul Gascoigne character, out of control?

And if Driscoll’s friends can’t deal with this, who can? Is it surprising that in desperation some outside that camp (either always outside or, like those above, people who have left) raise strong voices?

Those of us who are critical nevertheless have the responsibility not to lower ourselves to the standards we find objectionable in Driscoll in the way we speak out. We have to be careful that the fear we have for the damage that we believe is being done to people and will be done to Christian witness does not make us act out of fear and hence just lash out. If we do, it just gives an excuse for Mars Hill/Driscoll to say, there you are, look at how our opponents behave. It is hard not to be cynical and sarcastic, though, but we must guard against it.

Yet on the other hand, to be too soft is to give in. What else would those who exercise control want than to make people fearful to criticise?

Then there is the question not only of tone, but of language. Are words like ‘cult’, ‘spiritual abuse’ and ‘control’ unfair? If the evidence above is at all reliable (and the consistency tells us something, I think) then certainly we’re talking about control issues, and that raises the issue of ‘why?’. You can’t help thinking about fear and power, maybe a combination of the two, a fear of power being undermined, perhaps. If the structure is hierarchical, with all vision and pronouncements coming down from on high as if Driscoll has descended from Sinai carrying two stone tablets, then anything that questions that approach is not an isolated problem, but an attack on the foundations. And jolly good, too, because no frail mortal can cope with that kind of elevation. Even Moses didn’t.
What about spiritual abuse? Fifteen years ago, near the end of a difficult phase in my life, I heard Marc Dupont speak on the subject, and I bought his book, ‘Walking Out of Spiritual Abuse‘. Helpfully – in my opinion – he draws lessons from King Saul. On the one hand, the people of Israel got the king they deserved, because they rejected seeking the face of God in favour of having a charismatic personality. If that doesn’t ring alarm bells in all sorts of ways on today’s church scene, I don’t know what does.

But on the other side was the character of Saul himself. He looked the part, but his fears and insecurities led him into control and manipulation. At the conference where I heard Dupont speak, he talked about the incident where Saul is picked out as king. You may recall how Samuel ‘drills down’ through tribes and families before finally picking him out. Dupont pointed out that it says that Saul was found ‘hiding in the baggage’, and while the ancients didn’t use the notion of ‘baggage’ metaphorically as we do and so this is strictly bad exegesis, we can say from painful experience that it often is people with ‘baggage’ who cause spiritual abuse. As he says in the first chapter of the book,

Most leaders who end up with a harsh and demanding style of leadership are not individuals who would deliberately hurt others. (Page 13, author’s emphasis)

Could it be that Mark Driscoll is a man with unresolved baggage? He has owned up to fair amounts of difficulties in his marriage. Is he a man who wants to see many people come to Christ? Might it therefore be that this is a man with deeply good intentions, but whose emotional pain has led to the founding of a chronically misshapen church, leading to the problems described in the testimonies cited at the beginning of this post? On this basis, the accusation of spiritual abuse is possible – religious power misused in a way that consistently harms others, and done so by a wounded person who has been elevated to the level of celebrity, one place where a Christian minister probably never should be.

The most contentious allegation, though, is that of ‘cult’. This is a loaded term for Christians. It is a term often applied to religious movements that are essentially heretical deviations from Christianity, such as the Jehovah’s Witnesses, the Mormons or Christian Science. However, these should more properly be regarded as heretical sects, not cults. Or it is applied to heretical groups that engage in spiritual abuse – the Children of God, the Moonies and the like – and perhaps end in extreme dangerous devotion to the leader, such as David Koresh at Waco or Jim Jones at Jonestown.

On the surface, Mars Hill’s devotion to neo-Reformed theology still puts it in the Christian mainstream, which is why I can raise issues about whether the Gospel Coalition is doing anything about one of its Council members. But some cults began with orthodox Christian leaders who then deviated – David Berg of the Children of God could be a case in point here. Mars Hill cannot be regarded as unorthodox, and many of its currently contentious doctrines have been held by large numbers of Christians for a long time. Theologically, it would be wrong for Christians to call it a cult.

However, there are other definitions of ‘cult’ that operate not merely theologically but more sociologically. Is there intense devotion to a particular individual other than Christ? Are there behavioural patterns enforced which lead to, or are based on, a sense of superiority or exclusiveness? Exclusivity can be ruled out, due to associations with other Christian leaders such as John Piper and Terry Virgo (and, presumably, the Gospel Coalition leaders), even if they come from a fairly narrow field.
Even here, then, it is hard to justify using the word ‘cult’ of Mars Hill, but it must be admitted that the warning signs are there in the intimidatory and manipulative tactics to which those who have left testify. Authoritarianism certainly seems to be present, and if you read the ten signs of authoritarianism that Scot McKnight quotes from Wade Burleson, you will see a number of similarities.

But given these warning signs, the only right thing to do is to continue to raise the alarm. Today, much of that is going to mean doing so on the Internet.

I repeat: I do not think Mark Driscoll is evil. I think he has good intentions. He wants many to find Christ. He wants a disciplined church. He wants healthy relationships and for young men to be responsible. He wants to preserve the historic Gospel. All these things are honourable. I disagree with some of his emphases, as I do with some of what the Gospel Coalition stands for. I do not believe that Calvinism is the pure Gospel. Nor do I believe that the arc of Scripture points to a complementarian view of relationships, or to a view of hell as eternal conscious torment. I believe in substitutionary atonement, but I believe other images of the atonement also come into play in the New Testament. I also believe the Gospel Coalition intends well (I should point out that another of their council members is an old friend), although my expression of evangelical Christianity differs from theirs in almost exactly the same ways, and I have severe ideas with a sense that anything other than their exposition of the Christian message is unsound, just as Driscoll tends to label his detractors as automatically ‘liberal’.

Yet … for all the sincere intentions with which I believe Driscoll and Mars Hill started out, the combination of what looks like a possibly wounded (or maybe ‘undiscipled‘, using Bill Kinnon’s word) leader and a church celebrity culture makes for an explosive mixture. And when it does explode – quite regularly, it seems, because it is also volatile – great damage is caused. And for that reason, those of us who are concerned must keep raising our voices.