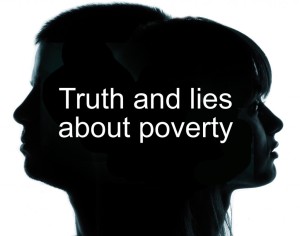 Today, the Joint Public Issues Team representing the Methodist, Baptist, United Reformed Churches and Church of Scotland publishes a report called ‘The Lies We Tell Ourselves: Ending Comfortable Myths About Poverty‘. It’s an important report anyway, but its publication is all the more timely in a week when the Royal Bank of Scotland has announced yet another multi-billion pound annual loss yet has managed to pay £215m in bonuses to investment bankers.

Although I left working in Social Security to study Theology in 1986, it is sobering to see that over a quarter of a century later, many of the same myths still have to be exploded. The report lists six myths that are propagated by some members of Government and parts of the media, and which are sadly swallowed by some people.

Myth 1: ‘They’ are lazy and just don’t want to work
Myth 2: ‘They’ are addicted to drink and drugs
Myth 3: ‘They’ are not really poor – they just don’t manage their money properly
Myth 4: ‘They’ are on the ﬁddle
Myth 5: ‘They’ have an easy life on beneﬁts
Myth 6: ‘They’ caused the deﬁcit

In my experience, the vast number of benefits claimants wanted to work. Their pride and self-esteem were badly hurt by unemployment or chronic sickness. Only a few had addictions. A certain number would spend their money wrongly, but not the majority: this, after all, is also the week when schools have reported children bringing in poor packed lunches such as cold chips, due to poverty. And aren’t we the society that has lived on ‘rampant consumerism’? Very few are on the fiddle, but set that against how much money is kept by the tax tricks of the rich. The idea that a benefits life is an easy life is ridiculous: you try living on that income level. And most preposterous of all is the contemporary claim that the poor caused the deficit.

The report has gone to every MP. Suggestions for action by ‘ordinary’ people can be found here: they involve contacting our MPs and our local newspapers.