I have changed my views in the sexuality debate.

If you’ve known me for many years, this post might surprise you. If the 1993 Methodist Conference debate on sexuality had approved of homosexual relationships, I would have resigned as a probationer minister. Had our Pilgrimage Of Faith report in the mid-2000s approved the blessing of civil partnerships on Methodist premises, I would have had a serious problem of conscience. I would have regarded such decisions as tantamount to apostasy.

So I’m now supporting the gay rights agenda? No.

Are you confused? Join the club, and read on.

The more I watch the debate among Christians since the Government announced its consultation on gay marriage, the more I am concerned about the tone we are setting. Honourable exceptions granted, this post is an appeal for the exercise of Christian love and respect between those of opposing opinions. This is the area where I am working hard to change, not least by spending much more time reading different opinions and befriending people with opposing views. There are several areas where both sides need to listen to each other.

Both parties have launched petitions in support of their causes, and neither one deserves my support. Can we get past the sloganeering, please? The ‘traditional’ Coalition For Marriage begins with sloppy language:

Throughout history and in virtually all human societies marriage has always been the union of a man and a woman.

So they haven’t heard of polygamy, even where kings of Israel take multiple wives. I agree with them that marriage is the exclusive life-long union of one man and one woman, but it hasn’t always been like that, and a campaign that can’t get its facts right from the outset is dodgy.

The Coalition For Equal Marriageis equal in sloppiness. It starts,

I support the right of two people in love to get married, regardless of gender. It’s only fair.

They don’t answer the traditionalist point about the legal equality to marriage that civil partnerships give. They don’t say why ‘it’s only fair’. The Reformed theologian Mike Bird, in commenting on the similar debate in Australia, wonders what distinctions rule gay marriage in and polyamory out. Please, then, can both parties think harder? Clear thinking and expression are important here.

In my native Methodism, the debate is tainted over thirty years by the ‘Issues in Human Sexuality’ report that reached Conference in 1982 (I think). It listed six grounds on which Christians discerned truth, ending notoriously with ‘The spirit of the age’, which was then used to trump traditional interpretations of biblical teaching. It gave the evangelical movement in Methodism (and please note in the current debate it isn’t as simple as evangelicals versus liberals any more) fuel to claim that support for homosexual practice was opposition to Scripture. Therefore anyone who takes such a view is heretical. Still it is assumed by the great majority of evangelical Methodists that the Bible is clear on human sexuality: one man and one woman exclusively for life, and chastity outside of such relationships.

More widely, the public split ten years ago between the Evangelical Alliance and Courage made it look like the only ‘biblical’ position on this was opposition to homosexual practice. 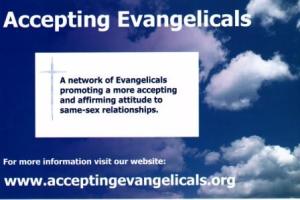 However, what is different in the debate now is that those in favour of committed gay relationships are interacting much more seriously with the Scriptures. In this I include Christians of various denominations. Twenty years ago I don’t think you would have had an organisation like Accepting Evangelicals, founded by Anglican priest Benny Hazlehurst. He won’t remember me, but we crossed over at theological college by a year. If you want charismatic evangelical credentials, Benny can supply them: he was not long back from serving in Hong Kong with Jackie Pullinger when I met him in Bristol. But he believes that support for gay marriage can be held with integrity alongside a commitment to the authority of the Bible.

However, in my assessment there are strengths and weaknesses in both sides’ biblical interpretation. The traditional view states that every scriptural reference to homosexual practice is negative (quite true), but those campaigning for change say that these reflect particular circumstances, such as abusive relationships and gay prostitution (as in the unusual Greek words used by Paul in 1 Corinthians), and that none of them reflects the contemporary notion of committed homosexual relationships.

I have to say I think that’s (only) partly right. For example, go to a moving website such as Reluctant Journey, run by George Hopper, an elderly Methodist Local Preacher who became persuaded of the case for change, and who has sought to become a Christian friend to gay people. In his analysis of the biblical material, he argues that the centurion’s servant who was healed by Jesus was most likely his master’s gay partner. That suggests some level of commitment, and therefore unwittingly contradicts the pro-gay stance.

At this point my personality traits kick in, hoping to resolve the problem, but they don’t help. You see, I’m one who goes for the wood not the trees, the big picture not the fine details – I’m ‘N’ not ‘S’ in Myers Briggs terms. So rather than get caught up in atomistic discussions of individual verses or even words, I ask where the overall trajectory is leading us. Even then I can’t resolve it. The foundational principle for the biblical discussion in both Jesus and Paul is Genesis 2:24, which grounds everything in heterosexual terms:

For this reason a man will leave his father and his mother and be united to his wife, and they will become one flesh.

On the other hand, Jesus – who makes no comments about homosexuality – shows radical inclusion to social outcasts. You could argue it either way. Perhaps what we need is for people from both groups to sit down together rather than throw theological grenades.

I suspect science is becoming less relevant to the debate. Every now and again the media will publicise some story about a scientific basis for sexual orientation. This seems to have some populist appeal on the naïve ‘If it’s scientific it must be true’ basis. None of these has ever convinced traditionalists. A doctrine of original sin is usually deployed to this effect. Moreover, as the American Baptist theologian Roger Olson recently argued that a scientific ‘is’ doesn’t make for a behavioural ‘ought’.
Until recently such scientific evidence has been used in support of gay rights.

However now even such a vocal campaigner as Peter Tatchell has admitted that the evidence is rather more fluid. I think I am right in saying (but have not found the link) to say that his line has become ‘Never mind science, this is a human right’. Please either correct me if I am wrong or let me know where he said this.

All of which makes some of the arguments over Anglican Mainstream’s use of controversial psychiatrists to oppose homosexuality rather irrelevant. And besides, even if they were to host a conference with a psychiatrist whose reputation could not be argued to be tarnished by their opponents, essentially their position in using psychiatry seems to be that homosexual orientation is a disorder. If it is, then it is a medical issue, not a moral one.

So what is the basis for deciding what’s right and wrong in sexuality? What it all comes down to is, ‘How do we know that we know?’ In other words, to give it its technical word, epistemology, that is, the study of knowledge.

The traditional view takes the teaching of Scripture and makes the case I have described. Those seeking change used to put human reason more highly but that is now vulnerable. Some of the argument in the church is about differing interpretations of Scripture, particularly about which of the diverse elements of the Bible take priority, as well as the questions of translation and context.

Beyond that lies the ‘secular’ argument of human rights that is such a strong narrative in society. It seems to be based on an assumption that what two consenting adults do in private is nobody else’s business, just so long as it is not harmful. Furthermore, it is influenced by a society that has downgraded the notions of responsibility and duty in favour of personal fulfilment.

And I do believe it is correct to call this a ‘secular’ argument. It is essentially premised upon the ideas of personal sovereignty and consumerism. Whatever view we take as Christians, we cannot get sucked in by these. Personal sovereignty contradicts the notion that Jesus is Lord. The consumerist attitude of personal fulfilment stands against sacrifice. And in passing, I note that the Church has not only asked homosexual people not to fulfil their feelings, she has asked many single women to do the same. For given both the teaching that Christians should only marry within the faith and the fact of female predominance in Church, many single women, not finding a life partner in Christian circles have seen it as their duty to stay celibate. Whether you agree with the teaching or not, at heart both parties have been called to make difficult and painful sacrifices.

Ours should be a conviction based on the big themes of the Gospel – a good Creator, who begins to make all things new in the wake of fallenness and brokenness, One who is seen supremely in his Son, a God of grace, truth and love. Which leads to my final thought.

Ethics
A story: I used to take some students on placement with me from a Bible college. One team led a midweek discussion group based on Nicky Gumbel’s book ‘Searching Issues’, which he wrote in response to the most commonly raised objections to Christianity raised on the Alpha Course. One of those topics was homosexuality, and the original chapter is now available as a separate booklet. Gumbel takes a traditional view of the subject.

During a debrief, I asked the students how they got on. ‘We told them the biblical view,’ said one. And I thought, ‘Oh no, you didn’t.’ Because by ‘the biblical view’ I knew they only meant, ‘what actions are right and wrong’. I said, ‘You didn’t give them a full biblical view if you didn’t start from the position of God’s unconditional love for all people.’

My spontaneous reaction that day is still a touchstone for me, especially because I am aware there are people on both sides (sorry to keep using that language, but I fear it’s true) who are hurting. I have gay friends who have suffered hurt, rejection and bullying. I have theologically conservative friends who are worried that the Gospel and mission are at stake here. Add to them the single women I mentioned above, of course.

The Christian Church, then, needs a huge dose of love to work through this matter, and I expressed my concern about the tone of the debate in my introduction. That’s the essence of my appeal here. I don’t know, but I wonder whether we will work ourselves through to the kind of place that James Jones, the Bishop of Liverpool, described a few years ago, to the consternation of many fellow evangelicals. His Presidential Address of March 2010 calls for ‘diversity without enmity’. He believes that the differing convictions on this subject are analogous to the differences Christians hold on subjects such as the just war and pacifism.

Is his proposal possible or desirable? What do you think? Or should the Church stick to one particular position? Indeed, would Jones’ proposal itself lead not to co-existence but to a singular conclusion?

Just one final word. I am happy to have comments from people of whatever persuasion, but in the spirit of this post I will watch for the tone of comments. Please, no labelling of people as homophobes or unbelievers. Let’s see if we can demonstrate love in the tone of our contributions.